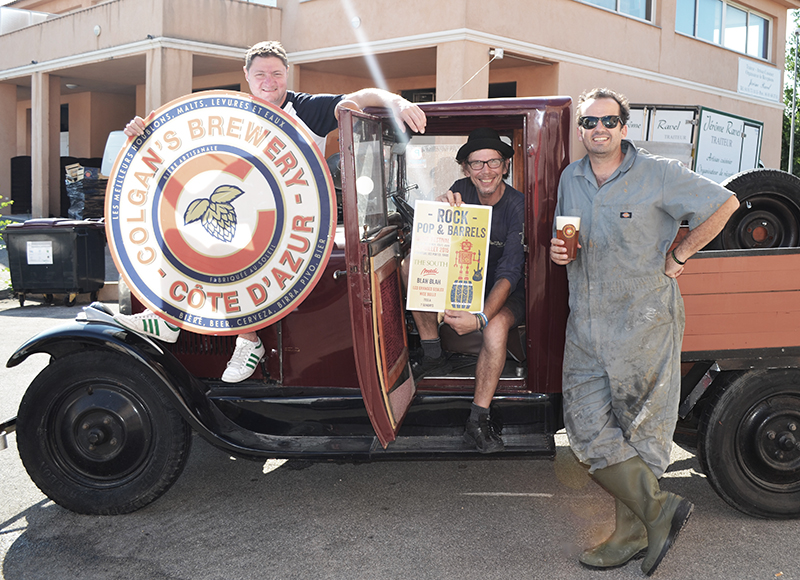 Think of a typical down-to-earth great Aussie bloke who had a dream. In the French Riviera, that’s Andy Colgan.

Andy’s love of beer came from a young age; when he used to steal his dad’s beer from the backyard fridge, an Aussie brew named ‘Emu Export’. There was nothing particularly special about this ‘bush chook’, a generic beer in Australia, but it would take the edge of a hot summer’s day out the back having a BBQ. From the first cold refreshing swig, Andy knew this would be a life-long friendship. What he didn’t know at the time was that someday he would be making some of the best locally brewed beer on the Côte d’Azur in years to come.

When he left Australia back in 2000, Andy fell into yachting (as do most yachties). His Aussie dollar savings hadn’t been quite enough to get him through and he needed some quick cash to tie him over for the European summer. A few jobs picked up here and there while wandering the docks with a friend with a broken foot would see him land feet first in the industry and Andy was here to stay.

Completing a serious innings in yachting, he decided it was time to follow his passion and started developing his own beer. Having amassed quite an expensive palette during his yachting career, the generic beers didn’t quite make the cut anymore. Andy wanted better and he knew he could brew better as well.

Andy started locally brewing the beer in September 2014 and founded Colgan’s Brewery with his brother Patrick, and they had their first official launch in October at Colgan’s Brewary HQ in Mouans-Sartoux. In keeping with the theme and spirit of the Cote d’Azur, all of Andy’s beers have a nautical theme, such as Pirate pale ale, Hopbuckler IPA, Captain’s stout and La Sirène.

But of course couldn’t have been able to do the rest of it without the help of Ian, who has over 12 years in the beer and brewing industry – a major player in the success of brewing the beer daily and consistently! Along with Al, the lead singer from Blah Blah, who heads up the sales and marketing department, the team call themselves The Musketeers – the comrades of beer!

Having one of the Riviera’s greatest rock’n’roll legends as your promo guy, it seemed only fitting that they marriage both their loves of beer and music. And launch the first local music festival for the Côte d’Azur: Rock – Pop & Barrels, which will be taking place on Saturday 4th July at the Théâtre de la Mer in Golfe Juan (keep your eyes peeled for more information this week).

So what gets Andy Colgan out of bed in the morning? Beside his three adorable children who need their breakfast, it’s his passion for beer and sharing good moments and times with friends and family. He lives and breathes his Colgan’s brand – whether you see him sporting one of his signature bottle opener-peaked caps or driving around in his old 1920s truck, he will no doubt have a huge grin on his face and a case of beer under his arm.

If you haven’t had the chance to meet Andy yet, he is easily spotted among the striped t-shirts and beige shorts of the south of France. There’s one item of clothing he is never without: his trusted gumboots (or for our English readers, wellingtons). Rumor has it he may be covering up a gammy foot from a trip gone wrong out at sea, while others claim that this particular Aussie has a pair for every day or could they be his lucky charm? We tried to get to the bottom of it with no luck – we’ll have to leave it up your imaginations!

Over the last 10 months, Colagn’s Brewery beers have been engrained in Rivera-expat culture and there is only more to come. I can certainly say after tasting (or skulling!) many of their bière delicacies already, I can assure you that any lover of a sophisticated brew will be asking for a tap to be installed in your house! (Please note, this can be arranged when necessary and almost immediately if required, kegs and Andy himself included.)